The purpose of this project was to create a movies about a genetic disorder that had to do with cells and mutations. I had an understanding of what we were doing because before we created the film, I worked on a flip book that tough me how a cell changes and regenterates. In the movie at one point we explained the reason for a genetic disorder. I thought I did pretty good with the acting. I am not a great actor but it was fun to try and create a nice movie. They wole class had problems as first with communtiation but after we past that our class was able to finish the project eficentaly. 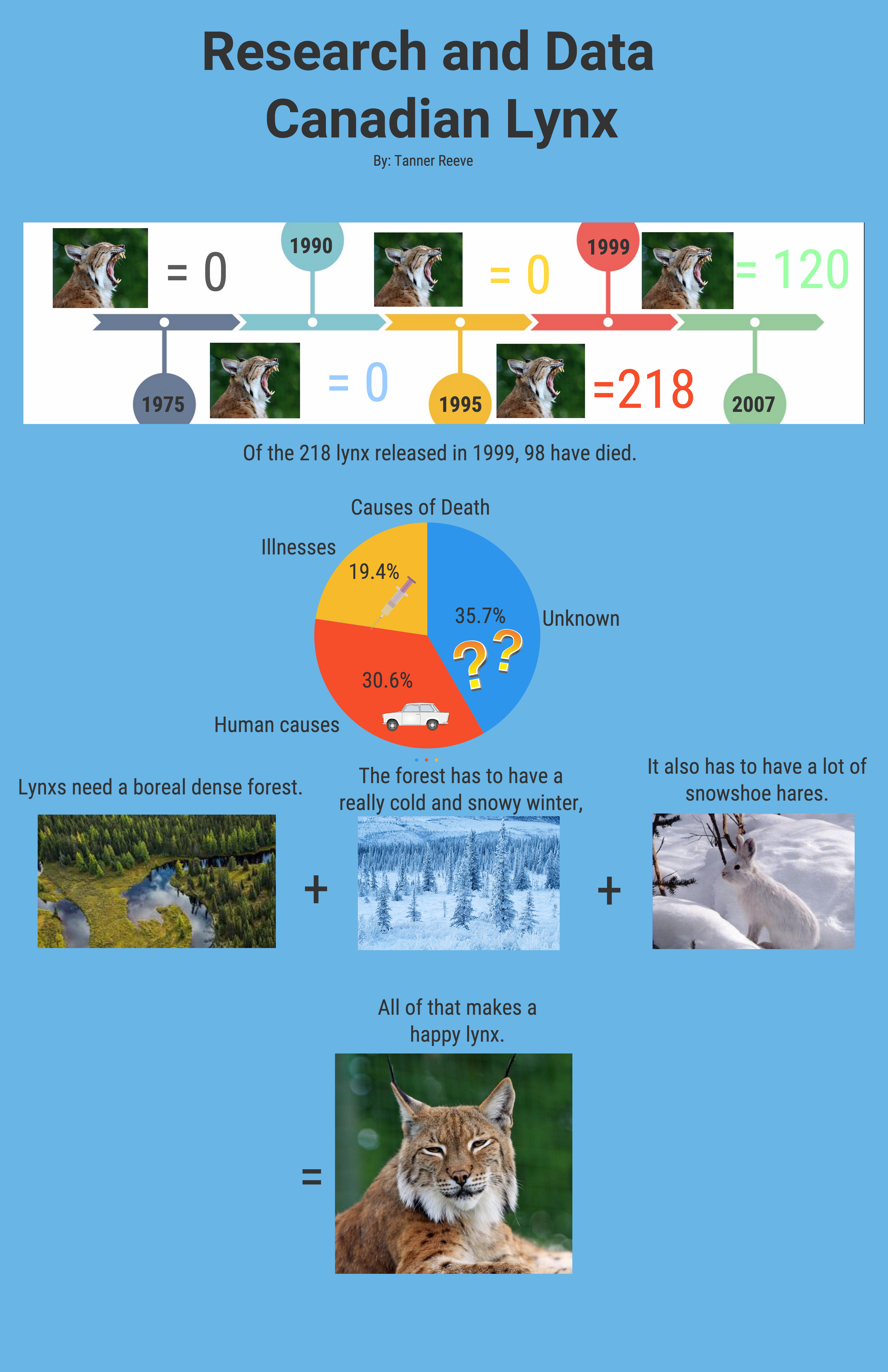 There was a lot of differnt things we did but the one thing we did that I thought really helped was how the group and I delegated tasks to one another. For example Alan would write the introduction and Lydia would take care of the data section and Ryan and I would take care of the Discussion. I did a lot of research on this project and was able to find a website telling us about the population of the lynx released in 1975. I also was one of the members that did most of the talking and presenting at the exhibition which I found really helpful because everyone else was able to go do there own thing. I struggled a lot with creating an infographic. I just could not figure out how to make it the way I wanted it and how to make it not interfere with my other group members infograpics. I was able to get passed this difficulty by advocating and getting help from the teacher. I would say that the personality trait that helped me was how comfortable I can get with a person in short amount of time, that is why I was able to ask for help. I actually learned something new at the exhibition from one of the parents there.
I learned that there are a lot more ways to get information then just using the computer for example you can call one of the other organisation that are studying your topic for information as well which could be a lot more informational the just researching it on the computer. I also learned that nature is all about cycles and I did already know this before this project but it was kinda of like a reminder. What I mean about cycles is that the lynx are there to make sure other animals do not overpopulate like the snowshoe hares. If the lynx are not there the snowshoe hares over populated and if there are no snowshoe hares there are not very many lynxs and then it starts all over again.
What I would do differently to make this project better would be to instead of making all separate infographics the whole team makes one big infographic that everyone can work on. I think it could of been nice if I was told or thought about the other ways we could of gotten information for example calling someone that has done a lot of research on the topic we are reasearch. An implication I learned from in this project that would help in the future would be that I have gotten really good at presenting work. At the exhibition my group had put up one of our group members posters up and I did not know anything about the poster he made. I read it once and was able to present it to others. That could help me in the future because then I can master my presentation skills. It would of been a little bit nicer if I was able to have more knowledge on how I use Venngage.
I would of been able to make a lot better of a poster that was neater looking and a lot more professional. I think the project worked really well with my learning style. Although I would've liked if there was a little more infomation on my project and if it was more of a group project so instead of all making separate posters we made one big one with all our information combined. This project has made me a lot more open minded to all the ways you can get information instead of just using the internet and that could be really nice for other projects that require a lot of information.